How to Improve in Baseball

From weighted balls to exit velocity, everyone has their gimmick that will get your son to the next level. But they are missing something, an “X-Factor” that current MLB players are recommending as the difference maker in a young ballplayer’s journey to Big League Fame. A quick backstory. My name is Nick Rotola, I founded American Baseball Camps at age 22 and had to proxy business ownership to my brother because running a baseball camp company while playing Division 1 Baseball is “deemed illegal by the NCAA.” –> Trust me those guys are a little much but that’s a conversation for another day. While at Oral Roberts University I got my Masters in Business Administration. After that I played my first season of professional baseball as a part of the Wichita Wingnuts, and like many ballplayers I love the game and will play until they tell me I can’t play anymore. Anyways, that’s enough of that, let’s get to what you came for…

The Sports & Fitness Industry Association releases a report every year showing the rise or decline of participation in each youth sport. Here’s the link to their report but you should know that it costs $600 to purchase so #buyerbeware.

What they found is that Baseball & Softball participation is on a rapid rise due to its popularity within the parents that are as conscious about their children’s health and well-being as any generation of parents to date. Many parents have their kid in baseball because they feel their use of technology needs to be mitigated, while others are in baseball because its a non-contact sport and concussions are really starting to scare people. (Not to say you can’t get concussions in Baseball). With that being said, there are more youth ballplayers than ever before. This, as with any rise in competition in business or in baseball, brings an inherent need to stand out. Ballplayers’ parents are shelling out thousands of dollars a year for showcase teams which are shouting: “We’ll help you get your kid to the next level.” But, as someone that’s recently been to the next level – and as a ballplayer that has “actually read a book once” as Bull Durham depicts – I feel that I may have some insights that could save a lot of Ballplayer Parents a lot of time and money over the duration of their kid’s career.

Precursor #2: Let Him Play As Much As He Wants

Every parent should understand this one because it is the case in every single profession in the world, it takes repetition to become an expert. In fact, it takes a person 30,000 hours of doing something to be considered an “expert” in their field. This lines up nicely with the 27-30-year-old “prime” that they tag on ballplayers. With this in mind, we learn two things for your young ballplayer. The first is that the more he plays the better he will become. It’s not saying that he’ll get better from a benchmarking perspective so don’t go comparing your son to the coaches’ son Shortstop just yet. It means that every time he puts on his cleats, in theory, he’ll be a better ballplayer than the time before. The second thing we learn from the expert analogy is that your son won’t be in his prime for a long time. Stop fussing if he went 1 for 4 and he should have went 2 for 4, its baseball, you have to be process oriented not results oriented.

Precursor #3: Don’t Be That Parent 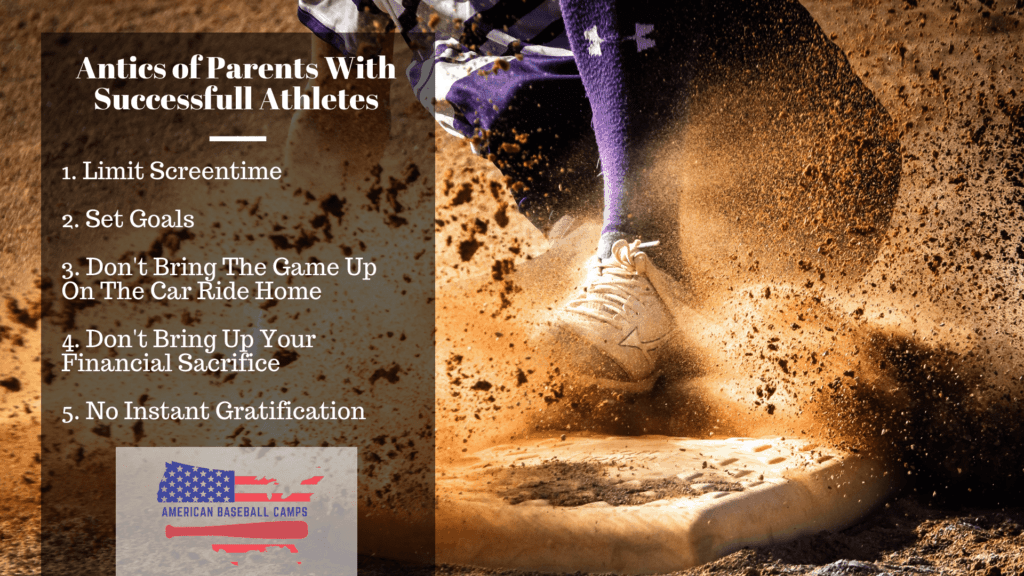 Limit Screentime. Kids are on their screens an average of 6.5 hours per day, time that does almost nothing for them in their baseball career, and probably pumps enough endorphins in their bodies that they have a tough time appreciating and loving the game of baseball like they could. Set Goals. It wasn’t until I saw a Division 1 Baseball game that I decided in my head as an 8th grader that I could do it. This is what it took me to reach “success,” and you can inspire the same goals in your kid. Whether it’s going to the High School he’d go to, or the College you’d love him to go to, get him to see with his eyes and imagine himself there. Don’t Bring The Game Up On The Car Ride Home. No one likes that pushy salesman in life, and your kid doesn’t want it in his baseball career. No Instant Gratification. Parents of top athletes exhibit positive emotions with their kid(s). In baseball, that means highlighting the positive and forgetting the negative. In baseball those great days don’t come that often, and if they do, they probably haven’t started throwing your kid sliders yet.

You don’t have to pay for it, it’s not a gimmick or an Instagram Ad promising improvement, it’s just confidence. When you ask an MLB player what he would recommend to a young player he says “play with confidence.” When you talk to a sports psychologist like Brian Cain about how to perform better at the plate they’ll say “walk to the plate with confidence.” Confidence is the key, and there are many things that you can implement as a parent to achieve tremendous confidence in your ballplayer over time. To illustrate to parents how you can get your kid to make a big jump in his young career by improving his confidence, I’m going to yield to a staple in Management Theory’s “Maslow’s Hierarchy of Needs.” How Maslow’s Hierarchy of Needs works, is that you have to solve the first layer before you can move on to the next, then the second before the third, and so on. So if you want your kid to increase in confidence let’s map out a plan to solve those bottom three layers. 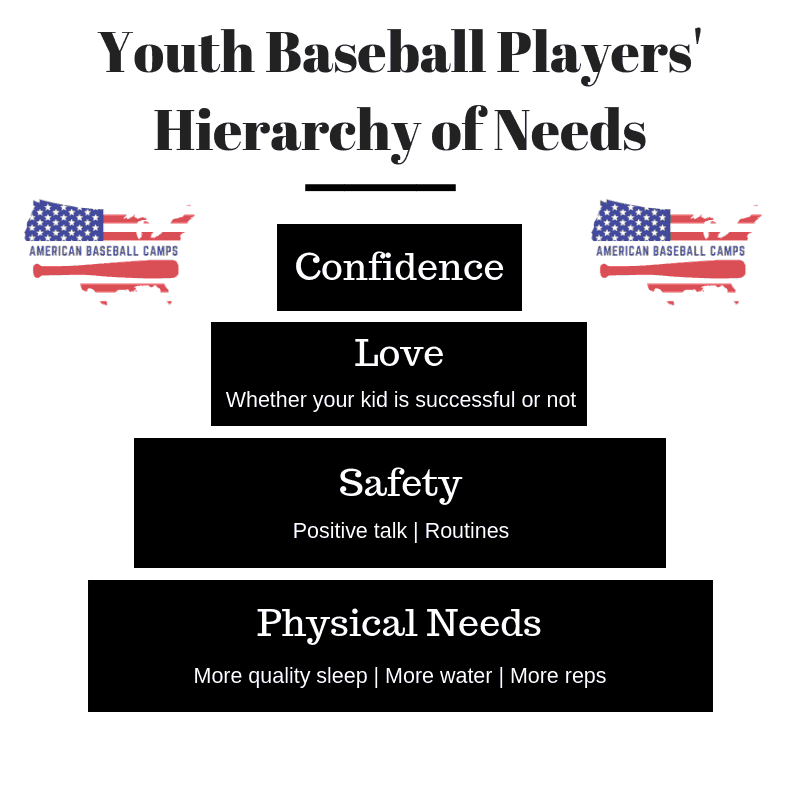 We already talked about playing as much baseball as possible this contributes to his physical and psychological needs as well. Now let’s look a litter deeper at getting your kid prepared from a physiological perspective. Brian Cain one of the worlds’ leading baseball psychologists recommends 9 hours and 15 minutes of sleep every night – not just the nights of competition. Studies show that increased sleep relates to better reaction times, more accurate reactions, and better able to handle stress. Studies also show that its not only the length of sleep but the quality of sleep that leads to better athletic performance. Did you know that the blue light emitted from that screen that your kid is staring at for 6.5 hours per day watching YouTube videos could be ruining his quality of sleep and in turn his baseball performance? It does, and it is, and it needs to be reduced if you want this layer of the period to be met. With regards to nutrition: studies say that an ounce of water for every pound of weight for people and then about 1.5 for every pound for athletes. Remove sugary drinks and add more water and you are off to a great start in helping him gain confidence. His mood will be better, skin, sleep, everything.

The game has changed, you can’t coach kids like you as a parent were coached. Negative reinforcement has officially been trumped by positive reinforcement. If you want more on this from a big-time coach -> Listen to Head Coach Chad Holbrook of the University of South Carolina talk about safety and positive talk while playing. How would you feel if your kid came into your workplace and was shouting at you telling you what to do as you were trying to do your job? Would you produce? Probably not. This is an exaggerated example, but I believe it accurately describes how difficult it is to hit a baseball when you can hear your dad or mom shouting instructions from the stands. Cut it out, and allow your kid to play.

As noted earlier, don’t talk about the game on the drive home. Your kid needs to feel that he is loved and that he belongs in your family apart from his baseball success. It’s hard to believe that this is a big confidence factor but it absolutely is. One of my best friends had a dad that only loved his son when he was playing baseball and playing well and I’m telling you from first-hand experience that it is a confidence destroyer. Love on your ballplayer, regardless of the results. You are doing your part already by getting him to the 100 games a year, making sure he sleeps and eats right, and that your talk is positive. Now make him feel like you love him and that he belongs despite his success on the field. It’s hard to believe but many parents send this message of “we love you, but we love and praise you if you win.” It’s awful, get rid of it. In conclusion… Kids are flooding into baseball like never before. If you want your kid’s next season to be his best season we’ve laid out tons of good tips on how you can do that. Here is our summary:   Thanks for reading! If you need any youth baseball advice we are always available to help at americanbaseballcamps@gmail.com, and we’ll do our best to respond quickly. If your kid wants more baseball – we’ve got great low-cost camp options in many US cities. For Winter 2018 we have camps from Wichita KS to West Covina CA. Next summer we will have camps in many US Cities –> All camp registration is done online, you can find out more about our camps on our camps page.

Want To Know When Our Camps Will Be Back In Your City?

Fill Out The Form Below So You Don’t Miss Our Next Camp!