Skip to content
Baseball is expensive, put more of your money into tournaments and camps that will make your kid better and less into gear with these savvy baseball shopping tips.

In 2016 Dick’s Sporting Goods announced its plan to build additional distribution centers across the US. They’re doing this because sporting goods like baseball equipment only sell in season. When they’re not selling particularly well (like right now for baseball) they are just burning holes in their distribution center shelves as they are hoping to fill them with more in-season gear (like football right now). They need to get this baseball stuff out, that is why their clearance selection is so large right now during “baseball limbo.” Here is a screen shot of some of their top bats on clearance: 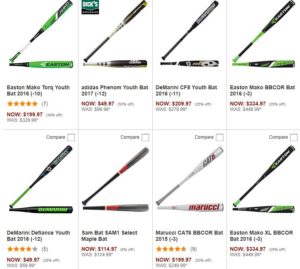 Here is a direct link to shop Dick’s Clearance Bat Selection The first one, the Easton Mako Torq for $199, that bat was $399 at one point. I’m telling you buy them clearance. *Here’s another tip* – The college guys, we get to test these new bats, we velocity test them, bat speed, the whole nine yards. What do we learn? THERE IS NOTHING BETTER ABOUT THE BRAND NEW MODEL. In fact, many of the 3 year old bats have more pop because they’re broken in. If you watch the CWS (which is the best players in the world still swinging medal bats), many of them are using models from 2 and 3 years ago. They aren’t improving year to year, just new branding. So buy one that’s a couple years older, and let him use it for a couple of years so it fully breaks in.

First of all, don’t get your kid a new glove if he’s comfortable with the one he’s got right now. There’s a famous story about Dustin Pedroia (2nd Baseman for the Red Sox) when he was at Arizona State. Glove company Wilson came in and gave everyone on the team a brand new glove with their name on it and everything with only one stipulation, you had to wear it in games. Dustin wouldn’t do it. He was ASU’s starting SS and he had been using the same glove since he was 11 years old. ASU’s glove contract with Wilson survived, but it tells us something interesting about gloves. YOU DON’T HAVE TO BUY ONE EVERY YEAR. In fact, if you look at the best fielders on your kids’ team, they’re probably all using gloves they feel really comfortable with. Comfort is everything with gloves. Most of the time that means finding one that you like, and sticking with it for a long time. Below we have selected a cheap and expensive glove option from Baseball Savings. I think they’ll both work great and hopefully, your kid sticks with them for 4 or 5 years. After the 2 year mark is when you really fall in love with a glove. If you notice, both of these gloves are Rawlings. We think its the best leather, and if you look at the big league infielders, most of them use Rawlings. The big difference between these two great gloves is the leather. The cheap option here is a nice “I-Web” glove that is going to be good for a long time. The expensive option here is the “Pro Preferred” model and its a “Trapeze-Web”. This is one of the most famous shortstop gloves of all time. A lot of pros like this glove. Both of these gloves are 11.5 inch which is for a shortstop or second baseman. Third baseman traditionally use an 11.75 inch glove, and outfielders a 12.75 inch glove. 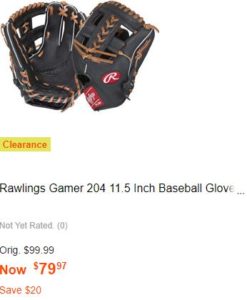 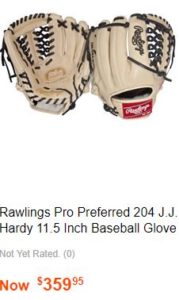 #3 Get New Balance Cleats — Most Comfortable & Last The Longest

Many of the College teams are switching over to New Balance cleats because the players are asking for them. These things are crazy comfortable and they last a long time. Cleats may be something you have to buy every year depending on your kids’ playing style, but these have the best chance to last you 2 or 3 years. Here is a screenshot of a good, low, molded cleat. 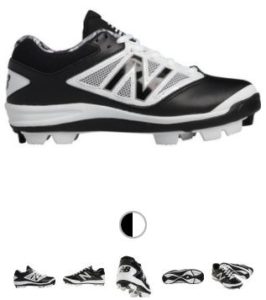 Link to these cleats   These recommendation were based on several hours of research and years of experience at the D1 level.

Want To Know When Our Camps Will Be Back In Your City?

Fill Out The Form Below So You Don’t Miss Our Next Camp!