A two strike approach is a plan a hitter executes when they have two strikes on them at the plate.

Many at-bats get to two strikes in youth baseball, so it is important to have a strategy when the time comes!

Know that hitting with two strikes is significantly harder than hitting early in the count, which is already hard.

Below is a table of MLB statistics in each count, note that the two strike counts are the lowest. 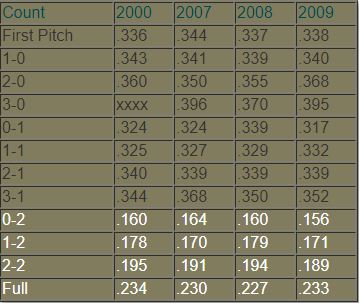 This graph doesn’t tell the whole story, however.

There are a lot of things really good hitters do with two strikes that help the team tremendously but don’t count toward batting average!

Also, this graph is for the MLB. We’re talking about much harder pitches to hit with two strikes and much better defenses. Your results from reading this blog are going to be much greater than theirs, because your son/daughter is going to know things that the pitcher on the 12u team your playing doesn’t know yet.

Those are some pretty great things that happen when you have a great plan with two strikes, now let’s jump to the plan.

Step 1: Get Up On The Plate

9 out of 10 youth baseball pitchers will try to throw outside when the hitter has two strikes on them at the plate. This doesn’t change when you get older, in D1 and Pro-Ball it’s still like 7 out of 10.

1a. Make It Easier

When you know the ball will likely be outside, you can take that pitch away by scooting up on the plate. You’re making an outside pitch look like its down the middle – making it easier to hit.

1b. Take The Umpire Out Of It

Pitches that seem outside when you are up on the plate are going to be really outside, limiting the amount of times you get screwed by an umpires bad call on the outside corner (big plus! & sorry for the language!).

Have you ever tried to play catch with someone, when someone without a glove is standing right by them? Isn’t it a lot harder than when that person is standing further away? Same concept with pitching to someone that is standing close to the plate, it sucks. Want to get in the pitchers head and have more success with two strikes? Get on the plate.

Step 2: Don’t Be That Parent

I think we probably touch on this point in every single blog post, but gah-lee it doesn’t help your kid at all to yell at him during his at bat.

Learning a two strike approach is something that happens in the off season, in a practice, at home. It’s not a matter of yelling get on the plate when your son has two strikes on him.

If you don’t trust my opinion as a former D1 & Professional ballplayer & founder of this company, then let me hit you with the science here:

Instead: sit back, relax, and trust that your son/daughter will do what you have worked on. If not, it’s no big deal. Like every good manager says, he’ll get em next time.

Did you ever wonder what they do at most youth baseball practices? Play catch, ground balls, fly balls, hit, maybe base running at times.

Coach does not have the time to develop every player like they should.

Also, not to offend people, but honestly – you get what you pay for with a youth baseball coach & no one cares about your son/daughter like you do so don’t expect him to.

I will say, if your son/daughter is tough to get out with two strikes – coach is going to love him!

So as a parent, how do you practice a two strike approach? Oh crap, hadn’t thought of that. Just kidding, here’s a list:

Work this into your backyard routine, as you should be doing as often as he is up for it.  Remember, getting better and becoming a great baseball player needs to be his dream, not yours! Don’t be overbearing, but do everything you can to help him!

Thanks for taking the time to read about the game your son/daughter loves so much.

This blog was written by Nick Rotola, Founder of American Baseball Camps. Nick played D1 ball as a SS/CF at Oral Roberts, a powerhouse in Tulsa, Oklahoma. Nick played two seasons in AA American Association where he played outfield and hit leadoff/ninth. Nick is the author of  many of our blogs, and of the e-book: At Home Baseball Program – Click Here To Download That Book